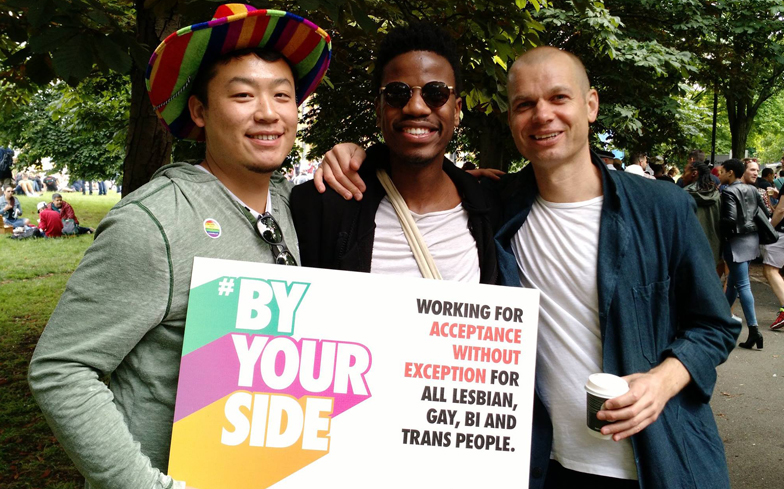 The organisation have said that the annual event – which attracts millions of people to the centre of the capital each year – have repeatedly failed to represent non-white communities.

Stonewall have said that they will fund the travel costs of 75 young people who want to attend UK Black Pride, as well as offering extended support for this year’s event.

“This year, with strong support from Stonewall, to ensure that no BAME LGBTQI person is left behind, we’ve grown our team and festival,” UK Black Pride’s Phyll Opoku-Gyimah said in a statement to Gay Times.

“We’re thrilled to have the continued and extended support of Stonewall to ensure UK Black Pride’s work to support BAME LGBTQI people reaches an even wider audience.

“As a volunteer-led community group, we stand open to collaborating with those who acknowledge the urgency of our work to overcome systemic barriers to liberation, and those who understand there can be no pride in lip service or exclusion.

“We encourage organisers of every Pride event – from the biggest to the smallest – to use this opportunity to listen and implement measures that meaningfully engage and include diverse LGBTQI community groups.” Announcing their decision to not support Pride in London in 2018, Stonewall stated: “We know this is an event that’s important to many in our communities and very much hope to attend in future years.

“However last year, Pride in London’s Community Advisory Board again raised concerns about the lack of diversity and inclusion at Pride in London – particularly of black and minority ethnic communities.

“Pride in London rejected those concerns from the community in the strongest terms and, as yet, have failed to make any public acknowledgment that they may need to make significant changes if Pride in London is to be an event for everyone. ”

They added: “We continue to be very willing to support Pride in London on this journey and recognise that they are taking some steps to increase the diversity of Pride in London and the events around it.

“We’re looking to support Prides around Britain to create events that are as inclusive as possible of all LGBT people in their communities.

“It is vital that organisations listen to those they represent and respond with an openness to improve and change.”

Reacting to Stonewall’s decision and statement, a spokesperson for Pride of London said: “We will always welcome Stonewall to march with pride in the Parade, and we hope to welcome their team at many community-driven events that will take place this year, during the Pride Festival.

“Embracing diversity in all its forms, and supporting organisations like UK Black Pride, is absolutely at the heart of our mission as a team. Our volunteers work hard to put on an event that is for everyone. It brings our diverse community together and gives groups, individuals, and organisations the opportunity to show what pride means to them.

“We are working closely with the Community Advisory Board and are dedicated to making Pride a success for all our communities – from those who have never been involved, to those who come back year-on-year, enabling them to celebrate, protest and march for equality.”

UK Black Pride will take place on Sunday, 8 July, a day after Pride in London on Saturday, 7 July.