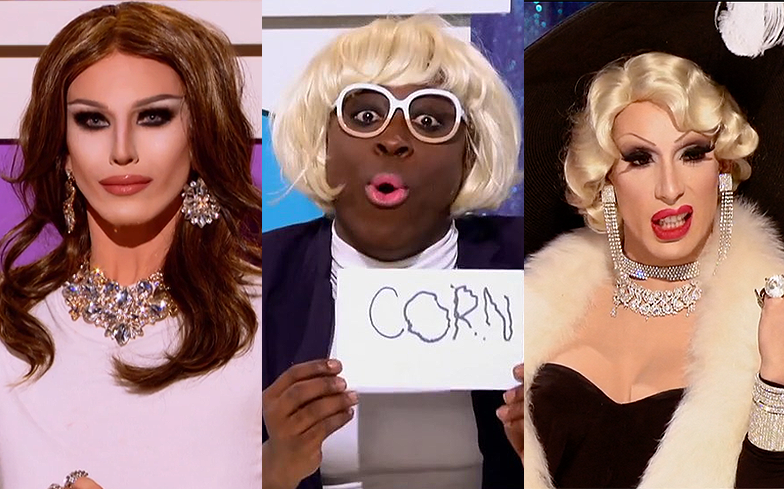 Who comes out on top? Is it Donald Trump? Maggie Smith? Or… Celia Cruz?

Each year, one of the most anticipated moments of RuPaul’s Drag Race – aside from the lip syncs, brand new catchphrases and crowning of a drag superstar, of course – is watching our queens show off their best celebrity impersonations.

Because Snatch Game is sashaying and shantaying to season 12 this week, we’ve compiled a list of our 20 favourite Snatch Game performances in HERstory – and no, Lineysha Sparkx’s Celia Cruz did not make the cut. Sorry hennies! Raja’s portrayal of her America’s Next Top Model bestie Tyra Banks earned the queen a top three placement for its wackiness and irreverence. Number one henny Stacy Layne Matthews may have won the challenge, but lines such as “Naomi Campbell is a cum-guzzling whore!” cement it as season three’s best performance. The first queen to impersonate two celebrities at once, Bob the Drag Queen wiped the floor with her season eight sisters with her dual performance as Orange is the New Black star Uzo Abuda and comedy legend Carol Channing. In past Drag Race seasons, there’s often debate as to who should’ve won Snatch Game, but there’s no denying Bob triumphed by a landslide.

After Naomi Smalls’ less than gag-worthy impersonation of Tiffany “New York” Pollard on her original season, it’s safe to say the runway fashionista was in desperate need of a rudemption. This time around, Naomi came prepared as reality personality and online troll Wendy Williams and if she hadn’t been on Trinity the Tuck’s team, she would’ve walked away with a win. Her fainting gag was one of the most memorable moments of All Stars 4, and a gif we still use to this day. Thank you Naomi Smalls.

Despite a stellar cast, All Stars 3’s Snatch Game was one of the worst in the show’s HERstory (sorry queens). BenDeLaCreme, however, came through for us with a sensational performance of American comedian and television personality Paul Lynde. Fun fact: she became the first (and only) queen to win Snatch Game twice.

After battling it out with Gia Gunn in the werkroom over who should play Caitlyn Jenner, Trinity The Tuck emerged triumphant and almost sent RuPaul and Gus Kenworthy into respiratory failure with her insane caricature of the trans icon. Manila Luzon may have won the episode, beating Trinity in the lip sync for your legacy, but The Tuck’s performance will be the one remembered in years to come. We waited so long for a queen to do Liza, and Alexis Michelle’s manic, over-the-top impersonation did not disappoint, leading to her first and only win of the series. The producers need to recruit Alexis for a future season of All Stars, because we have a feeling her second edition of Snatch Game would be less Tatianna (All Stars 2) and more DeLa (All Stars 3).

Adore Delano’s portrayal of the late Anna Nicole Smith was eerily accurate. The season six queen took inspiration from the model’s iconic drunken speech from the 2004 American Music Awards (which you can see here), echoing lines such as “Like my body?” and “I’m so honoured to be in the next performer’s video, and if I ever record an album… I want this guy to produce miiiiine.” Seriously, watch that video. It’ll make you appreciate Adore’s performance so much more. Any other season, Bianca Del Rio’s spot-on impression of Judge Judy would’ve walked away with the win, but… DeLa. The look, the attitude, and the way she shut down contestants such as Gia Gunn (“Beauty fades, dumb is forever!”) and Laganja Estranja (“BALONEY!”) made for some brilliant entertaintment. Bianca’s performance was so legendary that she was asked to reappear as RuPaul’s favourite Daytime Emmy-winning prosecution lawyer and family court judge for season 10. Ha impact!

When Baga Chipz was announced as a competitor for the very first season of RuPaul’s Drag Race UK, we had a feeling she would leave her fellow queens shaking. After all, she is a legend in the British drag scene and is well-known to UK queers thanks to her weekly stint as a judge at Heaven’s popular Porn Idol contest. But who knew she’d leave three-time Oscar winner Meryl Streep shaking too? As former prime minister Margaret Thatcher, Baga showcased a terrifying, demonic-like impression and delivered some brilliant one-liners such as, “REDUNDANCY!” Several months later and we still see her face every time we hear the word, which is quite often because… corona.

Season four featured the messiest Snatch in the history of the show. The amount of “romper-room fuckery” caused by queens such as Jiggly Caliente, Milan and Phi Phi O’Hara resulted in a furious Latrice Royale, who gave up halfway through (unfortunately, she would suffer a repeat of this in All Stars 4). Thank god for Chad Michaels! Her incredible performance as her idol Cher featured three wig changes, and not only did she look the part, but she brought the comedy. “I’m Cher bitch!”

As soon as Kennedy Davenport sashayed into the Drag Race werkroom, fans pegged the star as a “pageant queen” due to her embellished, rhinestoned runways and legendary title as the ‘Dancing Diva of Texas’. She proved us all wrong, huh? Her performance as Little Richard was a risk, as the first non-female celeb, but she exceeded expectations every single time she deployed one of the glam rocker’s signature howls. Her response to Batman and Robin converting their cave into a “bathhouse with a dark room and gloryholes” left her fellow competitors quaking in their boots, and it cemented her status a massive frontrunner for the crown.

The season two contestants had no mothertucking idea what to expect when Mama Ru announced the first ever Snatch Game. Queens such as Morgan McMichaels and Sonique didn’t mock their pop star characters (P!nk and Lady Gaga) out of respect and simply looked the part, which was fairly dull. Tatianna however, took the complete and utter piss out of her idol Britney and showed her Drag Race sisters that she can be as funny as she is fishy. It set the bar for future Snatch Games, basically. Aquaria surprised just about everyone on season 10 when she revealed her sharp comedic talent as The First Lady of the United States: Melania Trump. Despite comedy heavyweights sitting next to her on the panel such as Miz Cracker, Monét X Change and Eureka O’Hara, Aquaria managed to steal the spotlight and make RuPaul cackle without desperately vying for attention. She even revived her impersonation earlier this month to deliver an important message about the global coronavirus pandemic and to the surprise of no one… it went viral. C’mon World of Wonder, let’s get… a spin-off? Please? After decimating the first six challenges with her brand of old school camp and glamour, all eyes were on Ginger Minj to deliver season seven’s best Snatch Game impression – especially because the season was chock-full of fashion queens. Thankfully, she lived up to expectations and triumphed as an egocentric-version of beloved British icon Adele, answering all of RuPaul’s questions in a wonderfully bizarre Cockney accent with a fake fag in hand. Season seven is often blasted by fans – even fellow Drag Racers – due to the overabundance of scripted comedy challenges, but facts are facts: it boasted one of the strongest Snatch Games ever. In all 12 seasons of Drag Race, there has never been a queen with a personality as eccentric and demented as Katya (calm down keyboard warriors, we say that in a positive way and we’re sure she’d agree). Her impersonation of Icelandic singer Bjork was an inspired – and genius – choice, as it gave the self-described Russian hooker the opportunity to tap into her inner sociopath and wreak havoc on the panel and her fellow contestants. To this day, “remove their testicles” is one of the only quotes in the HERstory of the show that’s made us spit out our Tic Tac lunch.

Thanks to Baga Chipz and The Vivienne, the first Snatch Game on Drag Race UK was a roaring success and the best instalment of the iconic maxi-challenge in years. Although the two secured a joint win, it was The Vivienne’s eerily accurate impersonation of Donald Trump that stands at the finest performance from the challenge, and possibly even the whole first season of Drag Race UK? The star, who subsequently won the series, has since been hailed as the best Donald Trump impersonator in the world. She even secured her own series on World of Wonder with Baga as their characters, titled Morning T&T. Now we need one with The Vivienne and Aquaria… Although Jinkx Monsoon had an experienced background in comedy and theatre, her fellow competitors (especially Lineysha Sparkx and Coco Montrese, who bombed hard) underestimated her comedic prowess heading into the show’s staple challenge. Before Jinkx impersonated the fashion model and cabaret performer – who rose to fame with her appearance on the 1975 documentary Grey Gardens – a lot of younger fans weren’t… in the know. This made Jinkx’s performance that much greater, that she managed to deliver a pitch perfect impersonation and educate viewers on the bougie socialite in the process.

BenDeLaChrist may have missed out on the top spot, but “excuse me, we originated the language!” and “libations flavoured with citrus” stand as two of the wittiest comebacks in any Snatch Game – and we won’t hear any different. Try us! The terminally delightful performer was possessed by Dame Maggie Smith’s Emmy Award-winning Downton Abbey role, because the queen did not break character, even for a second. Oh, and her back and forth with RuPaul? Utter perfection. There’s just one queen who did it better… Whew honey, Alaska came for blood on All Stars 2 didn’t she? The star’s impersonation of American comedian Mae West showed her fellow competitors that she red-y for the crown, marking her first historic win of the season (out of four). Her performance won unanimous praise from the judging panel for her quick wit, snappy comebacks and complete commitment to the character. “Why don’t you come up and fuck me in the ass sometime?” Ladies, this is how it’s done. Will any of the season 12 queens topple Alaska from the top of our list?